Because Haskell is a language of choice for many problem domains, and for scales ranging from one-off scripts to full scale web services, we are fortunate to by now have over 8,000 open source packages (and a few commercial ones besides) available to build from. But in practice, Haskell programming in the real world involves interacting with myriad legacy systems and libraries. Partially because the industry is far older than the comparatively recent strength of our community. But further still, because quality new high-performance libraries are created every day in languages other than Haskell, be it intensive numerical codes or frameworks for shuffling bits across machines. Today we are releasing inline-c, a package for writing mixed C/Haskell source code that seamlessly invokes native and foreign functions in the same module. No FFI required.

The joys of programming with foreign code

Imagine that you just found a C library that you wish to use for your project. The standard workflow is to,

Writing and maintaining bindings for large C libraries is hard work. The libraries are constantly updated upstream, so that the bindings you find are invariably out-of-date, providing only partial coverage of library's API, sometimes don't compile cleanly against the latest upstream version of the C library or need convoluted and error-prone conditional compilation directives to support multiple versions of the API in the package. Which is a shame, because typically you only need to perform a very specific task using some C library, using only a minute proportion of its API. It can be frustrating for a bindings package to fail to install, only because the binding for some function that you'll never use doesn't match up with the header files of the library version you happen to have installed on your system.

This is especially true for large libraries that expose sets of related but orthogonal and indepedently useful functions, such as GTK+, OpenCV or numerical libraries such as the GNU Scientific Library (GSL), NAG and IMSL. inline-c lets you call functions from these libraries using the full power of C's syntax, directly from client code, without the need for monolithic bindings packages. High-level bindings (or "wrappers") may still be useful to wrap low-level details into an idiomatic Haskell interface, but inline-c enables rapid prototyping and iterative development of code that uses directly some of the C library today, keeping for later the task of abstracting calls into a high-level, type safe wrapper as needed. In short, inline-c let's you "pay as you go" when programming foreign code.

We first developed inline-c for use with numerical libraries, in particular the popular and very high quality commercial NAG library, for tasks including ODE solving, function optimization, and interpolation. If getting seamless access to the gold standard of fast and reliable numerical routines is what you need, then you will be interested in our companion package to work specifically with NAG, inline-c-nag.

What follows is just a teaser of what can be done with inline-c. Please refer to the Haddock documentation and the README for more details on how to use the showcased features.

Let's say we want to use C's variadic printf function and its convenient string formats. inline-c let's you write this function call inline, without any need for a binding to the foreign function:

Importing Language.C.Inline brings into scope the Template Haskell function include to include C headers (<stdio.h> and <math.h>), and the exp quasiquoter for embedding expressions in C syntax in Haskell code. Notice how inline-c has no trouble even with C functions that have advanced calling conventions, such as variadic functions. This is a crucial point: we have the full power of C available at our fingertips, not just whatever can be shoe-horned through the FFI.

We can capture Haskell variables to be used in the C expression, such as when computing x below:

The anti-quotation $(double x) indicates that we want to capture the variable x from the Haskell environment, and that we want it to have type double in C (inline-c will check at compile time that this is a sensible type ascription).

We can also splice in a block of C statements, and explicitly return the result:

In this example, we use the bs-len and bs-ptr anti-quoters to get the length and pointer for a Haskell ByteString. inline-c has a modular design: these anti-quoters are completely optional and can be included on-demand. The C.context invocation adds the extra ByteStrings anti-quoters to the base set. Similar facilities are present to easily use Haskell Vectors as well as for invoking Haskell closures from C code.

We have included various examples in the inline-c and inline-c-nag repositories. Currently they're geared toward scientific and numerical computing, but we would welcome contributions using inline-c in other fields.

For instance, gsl-ode.hs is a great example of combining the strengths of C and the strengths of Haskell to good effect: we use a function from C's GNU Scientific Library for solving ordinary differential equations (ODE) to solve a Lorenz system, and then take advantage of the very nice Chart-diagrams Haskell library to display its x and z coordinates: 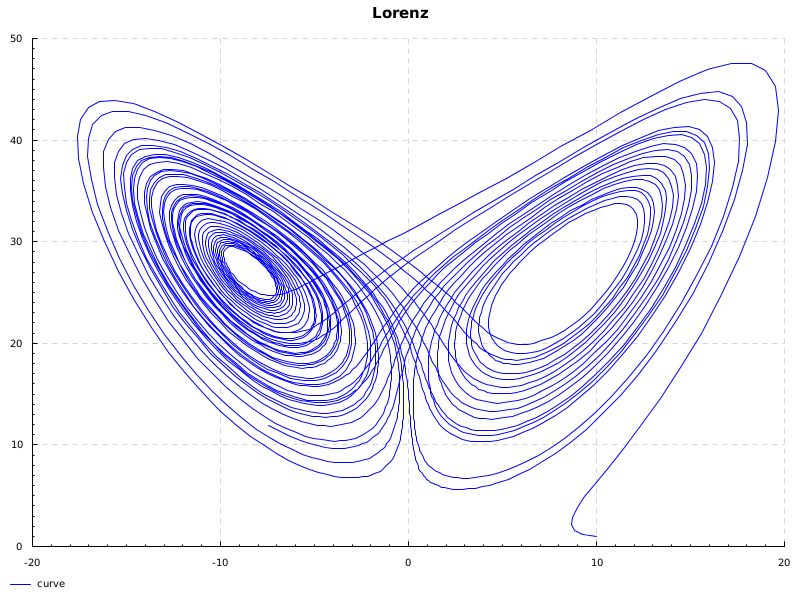 In this example, the vec-ptr anti-quoter is used to get a pointer out of a mutable vector:

Where fMut is a variable of type Data.Storable.Vector.Mutable.Vector CDouble. Moreover, the fun anti-quoter is used to get a function pointer from a Haskell function:

Where, funIO is a Haskell function of type

Note that all these anti-quoters (apart from the ones where only one type is allowed, like vec-len or bs-ptr) force the user to specify the target C type. The alternative would have been to write the Haskell type. Either way some type ascription is unfortunately required, due to a limitation of Template Haskell. We choose C type annotations because in this way, the user can understand precisely and state explicitly the target type of any marshalling.

Note that at this stage, type annotations are needed, because it is not possible to get the type of locally defined variables in Template Haskell.

How it works under the hood

inline-c generates a piece of C code for most of the Template Haskell functions and quasi-quoters function that it exports. So when you write

a C function gets generated:

This function is then bound to in Haskell through an automatically generated FFI import declaration and invoked passing the right argument -- the x variable from the Haskell environment. The types specified in C are automatically translated to the corresponding Haskell types, to generate the correct type signatures.

Custom anti quoters, such as vec-ptr and vec-len, handle the C and Haskell types independently. For example, when writing

we'll get a function of type

and on the Haskell side the variable xs will be used in conjuction with some code getting its length and the underlying pointer, both to be passed as arguments.

Building programs that use inline-c

The C code that inline-c generates is stored in a file named like the Haskell source file, but with a .c extension.

When using cabal, it is enough to specify generated C source, and eventual options for the C code:

Note that currently cabal repl is not supported, because the C code is not compiled and linked appropriately. However, cabal repl will fail at the end, when trying to load the compiled C code, which means that we can still use it to type check our package when developing.

If we were to compile the above manually we could do

As mentioned previously, inline-c can be extended by defining custom anti-quoters. Moreover, we can also tell inline-c about more C types beyond the primitive ones.

Both operations are done via the Context data type. Specifically, the Context contains a TypesTable, mapping C type specifiers to Haskell types; and a Map of AntiQuoters. A baseCtx is provided specifying mappings from all the base C types to Haskell types (int to CInt, double to CDouble, and so on). Contexts can be composed using their Monoid instance.

For example, the vecCtx contains two anti-quoters, vec-len and vec-ptr. When using inline-c with external libraries we often define a context dedicated to said library, defining a TypesTable converting common types find in the library to their Haskell counterparts. For example inline-c-nag defines a context containing information regarding the types commonly using in the NAG scientific library.

Our original use case for inline-c was always C oriented. However, thanks to extensible contexts, it should be possible to build C++ support on top of inline-c, as we dabbled with in inline-c-cpp. In this way, one can mix C++ code into Haskell source files, while reusing the infrastructure that inline-c provides for invoking foreign functions. Since inline-c generates C wrapper functions for all inline expressions, one gets a function with bona fide C linkage to wrap a C++ call, for free. Dealing with C++ templates, passing C++ objects in and out and conveniently manipulating them from Haskell are the next challenges. If C++ support is what you need, feel free to contribute to this ongoing effort!

We meant inline-c as a simple, modular alternative to monolithic binding libraries, borrowing the core concept of FFI-less programming of foreign code from the H project and language-c-inline. But this is just the first cut! We are releasing the library to the community early in hopes that it will accelerate the Haskell community's embrace of quality foreign libraries where they exist, as an alternative to expending considerable resources reinventing such libraries for little benefit. Numerical programming, machine learning, computer vision, GUI programming and data analysis come to mind as obvious areas where we want to leverage existing quality code. In fact, FP Complete is using inline-c today to enable quick access to all of NAG, a roughly 1.6K function strong library, for a large compute-intensive codebase. We hope to see many more use cases in the future.