What pure functional programming is all about: Part 1

We're going to be looking at a little language theory, type theory, and implementation and practice of pure functional programming.

We'll look at correctness, architecture, and performance of pure programs.

Firstly, we'll start with a pinch of theory, but not enough to bore you. We'll then look at how functional programming differs from "pure" functional programming. I'll establish what we mean by "side-effects". Finally, I'll try to motivate using pure languages from a correctness perspective.

A function is a relation between terms. Every input term has exactly one output term. That's as simple as it gets.

In type theory, it's described in notation like this:

Get it? I thought so. We'll come back to this later.

Functional programming as used generally by us as an industry tends to mean using first-class functions, closures that capture their environment properly, immutable data structures, trying to write code that doesn't have side-effects, and things like that. 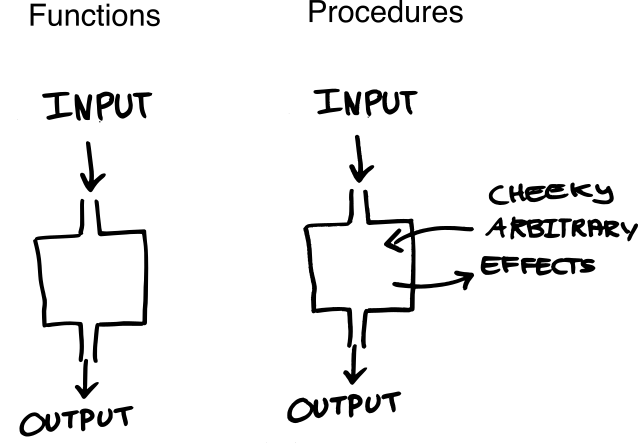 It's something of a misnomer that many popular languages use this term function. If you read the language specification for Scheme, you may notice that it uses the term procedure. Some procedures may implement functions like cosine, but not all procedures are functions, in fact most aren't. Any procedure can do cheeky arbitrary effects. But for the rest of popular languages, it's a misnomer we accept.

Let's look into why this is problematic in the next few sections.

What actually are side-effects, really? What's purity? I'll establish what I am going to mean in this series of blog posts. There are plenty of other working definitions.

These are some things you can do in source code:

These are all things you cannot do in a pure function, because they're not explicit inputs into or explicit outputs of the function.

In C#, the expression DateTime.Now.TimeOfDay has type TimeSpan, it's not a function with inputs. If you put it in your program, you'll get the time since midnight when evaluating it. Why?

In contrast, these are side-effects that pure code can cause:

So I am going to use a meaning of purity like this: an effect is something implicit that you can observe during evaluation of your program.

Which languages are purely functional

So, a pure functional language is simply one in which a function cannot observe things besides its inputs. Given that, we can split the current crop of Pacman-complete languages up into pure and impure ones: 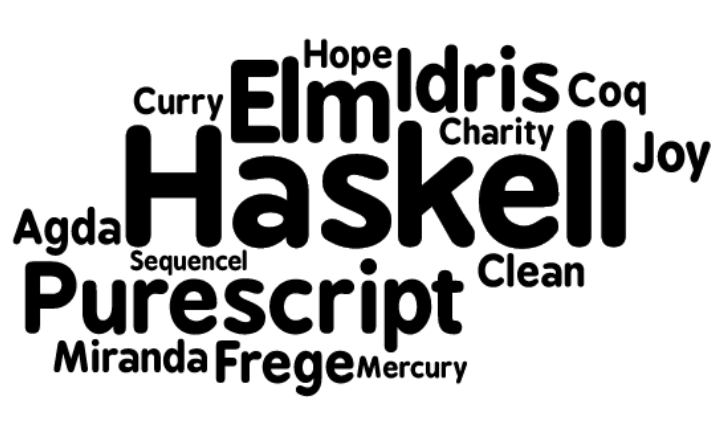 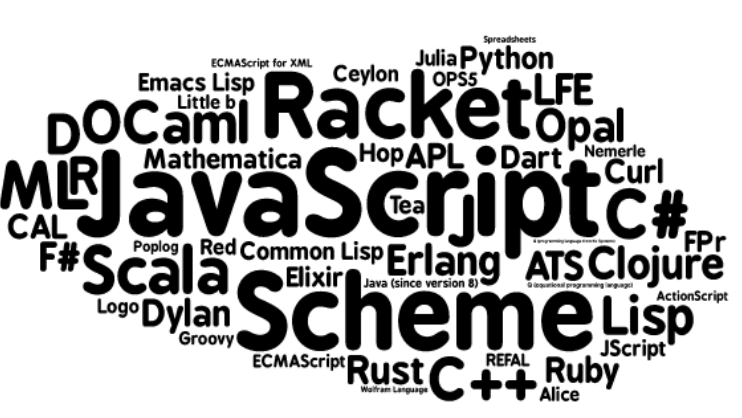 Haskell (we'll use Haskell in this series), PureScript and Idris are purely functional in this sense. You can't change variables. You can't observe time. You can't observe anything not constructed inside Haskell's language. Side effects like the machine getting hotter, swap space being used, etc. are not in Haskell's ability to care about. (But we'll explore how you can straight-forwardly interact with the real world to get this type of information safely in spite of this fact.)

We'll look at the theoretical and practical benefits of programming in a language that only has functions during this series.

In a pure language, every expression is pure. That means you can move things around without worrying about implicit dependencies. Function composition is a basic property that lets you take two functions and make a third out of them.

Calling back to the theory section above, you can readily understand what function composition is by its types. Lets say we have two functions, f : X → Y and g : Y → Z: 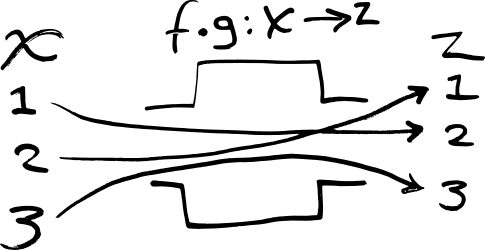 In JavaScript, f ∘ g is:

There's also an operator that provides this out of the box:

You can compare this notion of composition with shell scripting pipes:

Each command takes an input and produces an output, and you compose them together with |.

We'll use this concept to study equational reasoning next.

Let's look at a really simple example of composition and reasoning about it in the following JavaScript code and its equivalent in Haskell:

There's a pattern forming here. It looks like this:

The f and g variables represent any function you might use in their place.

We know that map id ≣ id, that is, applying the identity function across a list yields the original list's value. What does that tell us? Mapping preserves the structure of a list. In JavaScript, this implies that, given id

Map doesn't change the length or shape of the data structure.

By extension and careful reasoning, we can further observe that:

So you can refactor your code into the latter!

Actually, whether the refactor was a good idea or a bad idea depends on the code in question. It might perform better, because you put the first and the second function in one loop, instead of two separate loops (and two separate lists). On the other hand, the original code is probably easier to read. "Map this, map that ..."

You want the freedom to choose between the two, and to make transformations like this freely you need to be able to reason about your code.

But it doesn't work in JavaScript

Turning back to the JavaScript code, is this transformation really valid? As an exercise, construct in your head a definition of first and second which would violate this assumption.

The answer is: no. Because JavaScript's functions are not mathematical functions, you can do anything in them. Imagine your colleague writes something like this:

You come along and refactor x.map(first).map(second), only to find the following results:

Looking at a really simple example, we see that basic equational reasoning, a fundamental "functional" idea, is not valid in JavaScript. Even something simple like this!

So we return back to the original section "Functional programming isn't", and why the fact that some procedures are functions doesn't get you the same reliable reasoning as when you can only define functions.

A benefit like being able to transform and reason about your code translates to practical pay-off because most people are changing their code every day, and trying to understand what their colleagues have written. This example is both something you might do in a real codebase and a super reduced down version of what horrors can happen in the large.

After that, we'll explore the performance and declarative-code-writing benefits of pure functional languages in particular detail, looking at generated code, assembly, performance, etc.